The Castle and the “Torre Fortissima”

The Malaspina Castle of Tresana stands on a rock at the peak of the narrow plain of the Osca river, a tributary of the Magra river. The fortress has steep slopes and almost vertical walls that make the castle inaccessible and easily defensible, as well as suitable for sightings (from the fortress the view extends to the “Apuane” Alps). The castle belonged to the Marquises Malaspina of the “Spino secco” , an ancient lineage of “Longobarde” origins.
The Castle has known different construction phases. The oldest part is represented by a mighty quadrangular tower, about 27 meter high and was built back in 11th-12th century (it is believed that the name Tresana derives from “turris sana” meaning “torre fortissima”). Over the following centuries the castle was enlarged. In particular, in the 14th-15th century the quadrangular tower was flanked by a large tower with a semicircular base.
Tresana with its Castle became an independent fiefdom in 1565 by will of Emperor Massimiliano II of Habsburg (Emperor of the Holy Roman Empire) who granted the investiture to Guglielmo Malaspina, to whom, in 1571, he also attributed the right to coin money, the privilege reserved only to two other marquisates Malaspina of Fosdinovo and Cybo-Malaspina of Massa. Unfortunately, since 1588 the Mint of Tresana became known for the counterfeiting of coins including those of the Papal State, which gave Tresana and his Marquis Francesco Guglielmo the excommunication of Pope Clement VIII (born Ippolito Aldobrandini). A very turbulent period follow, the population of Tresana take sides against the Marquises Malaspina. As result, Marquis Jacopo, brother of the Marquis Guglielmo II, was killed in 1650 by an arquebus as he climbed one of the external stairs of the Castle. The Marquis Guglielmo II died instead in 1651, struck by a stroke while he was at the table. The Marquis had no legitimate heirs. The feud was occupied by the Spaniards who in 1660 sold it to the Corsini Princes of Florence. Then Napoleon with his french army took control in 1797. After Napoleon’s defeat , the Castle of Tresana returned to the Corsini princes who in 1856 sold it to Mr. Luigi Rossi, however, retaining the noble title of Marchesi di Tresana. The Castle had been in very bad condition for some time. In 2009, the Maneschi Foundation became its owner after an expropriation proceeding undertaken according to the provisions of the Code of Cultural Heritage. The restoration of the castle started in 2010. Currently most of the castle has been restored.

Emperor Massimiliano II of Habsburg granted Marquis Guglielmo I Malaspina of Tresana, in the year 1571 the privilege of coining money. Guglielmo I, his son Francesco Guglielmo, and his nephew Guglielmo II, with whom the family died out in 1652, took advantage of this privilege. Guglielmo I Malaspina had limited himself to making small coins (“sesini”) without ever making a real and own counterfeit. His son Francesco Guglielmo, who was often away from the feud, in 1598 appointed his own lieutenant general Lucchese Castruccio Baldissori to represent him in all his functions and to control the mint. Castruccio, taking advantage of the absence of his lord, agreed with the mint master Claudio of Antonio Anglese, to coin large quantities of counterfeit coins, including those of the papacy.
Pope Clement VIII, damaged by Tresana’s forgeries, sued the Marquis, his lieutenant and the minter. The Marquis did not appear in court, instead he was the minter who blamed the whole thing on the Marquis. Francesco Guglielmo was struck by the excommunication and deprived of the feud and the Castle, which he regained only after several years. His son Guglielmo II, a man of authoritarian, dissolute and overbearing character, who succeeded his father, gave himself an easy and expensive life, so much that not knowing how to make money he decided to reopen the mint, which he entrusted to a real forger, Giovanni Agostino Rivarola. Fortunately the Rivarola could not deal long with the Tresana mint, it was in fact arrested after a short time and this prevented the Marquis from going broke. We do not know exactly where the mint was located. It is probable that it was located in the eastern part of the Castle, a part built around the second half of the 16th century, in the period in which the mint began its activity. Infact a stone gutter was found on the external wall of this building, perhaps a channel for draining metals.

Tresana and its Marquises Malaspina

The first Marquis of Tresana was Guglielmo I. A man of high intelligence, a diplomat at the court of “Mantova”, in 1565 he obtained from the Emperor Massimiliano II the investiture of the feud and the right to establish the birthright (the power to hand down the fief of first-born son to first-born ) and in 1571 the privilege, rare enough, to build a mint in Tresana to beat money. The Marquis Guglielmo, who died around 1580, was succeeded by his son Francesco Guglielmo. He too, as his father, was called to carry out political and diplomatic activities at the court of Mantova. Unfortunately, the Marquis Francesco Guglielmo was involved in the unlucky events of the Tresana mint, which minted false coins. Since the falsification had also damaged Pope Clement VIII he launched the excommunication which, among other things, dissolved the subjects from the oath of loyalty. The community of Tresana fed up with the bad government of the Marquis rebelled. They took possession of the village and kept the Marquis prisoner in the Castle. Only after laborious negotiations the Marquis got a safe-conduct from the people to go to Milano to plead his cause. He was able to re-enter the fiefdom only after several years. The Marquis Francesco Guglielmo, who died in 1613, was succeeded by his son Guglielmo II with whom the marquis dynasty of the fiefdom of Tresana was over . Perhaps exasperated by the attitude that his subjects had towards his father, of an authoritarian, dissolute and overbearing nature, this Marquis indulged in all sorts of irregularities, provoking so much outrage among the subjects that, in 1617, they came to plot a conspiracy to kill the Marquis and give themselves to another Prince.
The conspiracy failed and the following years were a succession of riots, retaliations and ceasefires , until in 1650 the subjects, returned to their usual disobedience and killed Guglielmo’s brother, Marquis Jacopo:

“One morning on sunrise, being a very dense fog, against the Marquis Jacopo, while climbing an external staircase of the Castle, an archibusate was drawn which, investing him in an arm and in the belly, took him to his grave within 24 hours.”

The Marquis Guglielmo died soon afterwards. The end came on the evening of January 7th 1652:

“While he sat at table hit by sudden stroke, lost the power of speech and in just three days he past away.”.

The Marquis did not leave legitimate children. The news of Guglielmo’s death spread, the population rushed to besiege the Castle where the widow and a few servants were. The relatives of the Marquis tried to come forward to have the fief as an inheritance, but the the people of Tresana proclaimed as their lord the king of Spain Filippo IV and the Duke of Milan who took possession of it.

Malaspina’castle of Tresana and its B&B are on the route of the pilgrims called Via Francigena. The Via Francigena, between the end of the first millennium and the beginning of the second, was the central hub of the great path of faith. The pilgrims from the north followed it to head to Rome and eventually continue along the Appian Way to the Apulian ports where they embarked for the Holy Land. Italian pilgrims going to Santiago de Compostela traveled north to Luni where they embarked for French ports and then for Spain. Thanks to the travel diaries and notes of an illustrious pilgrim named Sigerico, that it was possible to reconstruct the route of the Francigena. In 990, after being ordained Archbishop of Canterbury by Pope Giovanni XV, the abbot returned home making notes on the various locations (inhabited or hospitable centers where he was staying for the night) in which he stopped overnight. Certainly Sigerico stops in Aulla and then goes towards Pontremoli. Sigerico to get to Pontremoli goes to La Magra in Terrarossa, passes through Tresana and then turns towards Castevoli, Talavorno, Mulazzo and Pieve di Saliceto. It is possible that in 990 the main tower of the Tresana Castle had already been built; certainly on the fortress at that time there was a settlement of Lombard origin. It is possible therefore that Sigerico, on his way to Pontremoli, stopped and found lodging and shelter precisely in the fortress where Tresana Castle stands. 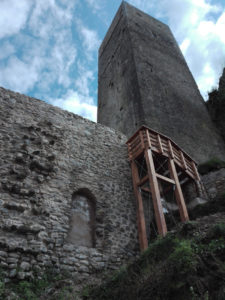 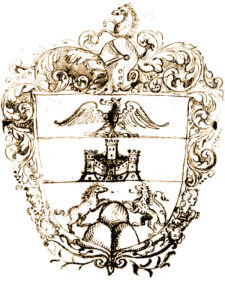 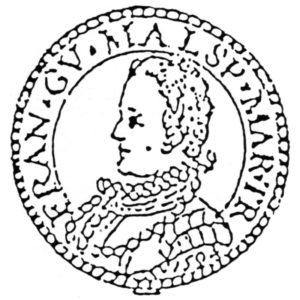 Portrait of the Marquis

A “cavallotto” of the Marquis